Lately I’ve been feeling more depressed than I normally do. Sometimes, unfortunately, that means I want to cut myself. Along with many other people, I sometimes self injure/self harm, and well, to put it simply, it’s not a good coping technique. I’m working on not cutting myself, ever, but the urges to cut come on pretty strong sometimes when I feel depressed or anxious.

In this blog post, I’m going to go over a technique that I sometimes use to stop myself from cutting when I get those urges! I actually had urges to cut and did this instead today, so you get pictures. It also worked today: I didn’t cut. Go me!

It’s super simple, and might seem silly, but I find that this coping technique helps and is much, much healthier (and cuter!) than cutting. Basically, what I do is put temporary tattoos over my skin wherever I want to cut. I like to have temporary tattoos on hand, but if you don’t have any, you can buy them cheaply (and if you struggle with urges to cut sometimes, I recommend that you get some to have on hand, because going out to buy some is not always convenient. Pick some that you find cute, that you wouldn’t want to cut over because they’re too pretty (or totally badass, if that’s your thing). 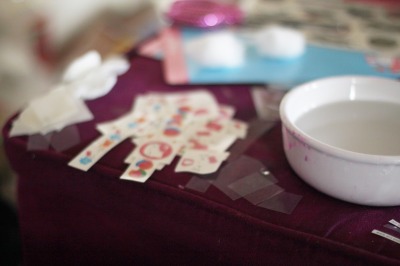 Here’s what you do, if you aren’t familiar with temporary tattoos or can’t think clearly! You take one individual temporary tattoo (you may have had to cut it out from a sheet first to get one on its own), peel off the clear layer of plastic that comes attached to the front to prevent it from sticking to things. You then place it, tattoo side down, against your skin where you would injure yourself and take a damp cotton ball (dip it in the water and squeeze out excess water above the dish/bowl) and press it on the exposed paper that is on the other side from the tattoo. You want to press it firmly against the temporary tattoo for several seconds, to get it to stick. After you’ve done that, carefully peel off the paper – the temporary tattoo should be stuck to your skin!
I find this coping strategy helpful when I want to self harm for a couple of reasons! First of all, I never want to cut over a temporary tattoo, just like I would never cut over my real tattoos, so if the area is covered with temporary tattoos I won’t cut there. Second, the act of doing something that requires some focus and some of my time helps me to calm down, and often after I’ve done it I don’t feel quite so much like self harming, so it’s easier to stop myself from actually doing it. I try to take deep breaths while doing it if I feel like I need to or if I’m shaky.
An added bonus to this technique is that it looks really cute and awesome when you’re done! Here’s a picture of how it looked when I was done putting temporary tattoos on myself to calm myself down today:

Finally, here’s an alternative technique that my friend Kate told me about (bonus: it’s cheaper, too!) draw a butterfly over where you want to cut.
I hope that this helps you guys, I know it helped me.
xoxo,
Zelie Pie